This is Jan Schon and I’m taking a moment out from my usual type of posts to tell you about something completely unrelated. I’m always out on the road visiting schools and colleges and speak to a lot of people, so this post is about the new loves of my life: dogs. 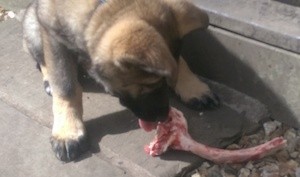 From years and years of not having dogs in our house, in the space of 4 months we’ve now got two. We got our first dog, a golden cocker spaniel in October 2014 when he was 8 weeks old. Everyone loved him so much we decided to get another dog to keep him company and in March we got a 7 week old German Shepherd girl. Now six weeks after we got her, she’s slightly taller than him an probably as long too, although it’s difficult to tell because our cocker spaniel has long fur so unless he’s been swimming and his coat is wet it’s difficult to see where his body stops and his coat starts.

The spaniel was really the choice of my wife and our eldest daughter, the remaining three of us just went along with it, so when it became clear that we were going to be getting another dog, the three of us who didn’t really have much input into the first breed we got decided we’d like a German Shepherd.

If you’ve never owned or been around spaniels before you might not know that they are a bit daft, ours is generally well behaved but does go a bit loopy from time to time. Out Shepherd is very chilled out and calm, dare I say a ‘model’ dog at the moment. Due to this there’s a joke going around our house at the moment: “Question: What’s better than a German Shepherd? Answer: Two German Shepherds!”, but I’m not so sure how we’d all manage if we had three dogs. Two is fine, they get on well and play together a lot of the time.

Anyway, back to work, I’m off visiting a school where data seems to be disappearing….